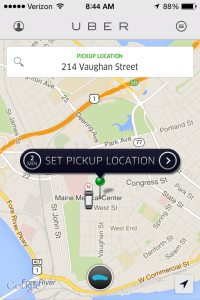 Everywhere Uber and Lyft pop up, local lawmakers scramble to address it. Taxi operators and other livery drivers rail against it. And insurance companies caution drivers who might think about joining the Uber fleet.

If they have a personal auto policy, their own insurance will not cover them while they’re driving someone for a fee. Period. Every PAP excludes coverage while a vehicle is being used as a “public livery or conveyance“, which basically means driving others for hire. An Uber driver in an accident shouldn’t count on their personal insurance helping out.

You can’t blame insurance companies for that. If you’re driving for Uber, you’re probably driving more miles and hours than you otherwise would. You might be in areas unfamiliar to you, under time constraints, and at hours with higher congestion or impaired operators on the road. All of those increase the likelihood you could have an accident.

The Good News
Uber’s web site says that the service provides a commercial insurance policy with a $1 million limit per incident, including uninsured/underinsured motorist coverage. That’s more than 90% of drivers in Maine have. It also provides $50,000 of “contingent comprehensive and collision insurance”, which should pay for repairs to an Uber driver’s vehicle as a result of an accident during an Uber trip.

Not So Good News
Uber’s insurance drops to to $50,000 per person for bodily injury and $25,000 for property damage “between trips” – the absolute minimum limits allowed in Maine. That’s inadequate for most people who want to protect their assets or future earnings from an expensive lawsuit.

Uber says that most auto insurance policies will provide coverage during the time that the driver is logged on available for hire  but between trips. Talk is cheap. Don’t count on an insurance company seeing it the same way. When presented with a claim, expect an insurance company to say you were engaged in livery, just not actively driving someone – and deny your claim.

What Kind of Insurance Should an Uber Driver Have?
The only type guaranteed to cover you is a business auto policy, rated as livery use. If you insure your car with Maine commercial vehicle insurance  and are upfront about your Uber driving, you should be covered.

Is Uber Rideshare Service Safe to Use?
If you’re thinking of taking a ride from Uber, you can expect that the driver has insurance while you’re in the vehicle. That includes if you’re hit by someone with no insurance. If you have a personal auto policy, you also have Medical Payments coverage (usually $5,000 or less) for minor medical expenses.

If you have questions about Portland Maine auto insurance or Maine business insurance, contact Noyes Hall & Allen at 207-799-5541. We’re independent and committed to you.