Are you buying your first condo? Downsizing from a single family home to a condominium? Moving to Portland Maine and buying a condo? Your insurance will be completely different in a condo. Insurance needs vary a lot from one Portland Maine condo association to another. Insuring a sleek new unit on Newbury St. is different than a historic condo in a 3 unit building in the West End. A good insurance agent knows the difference. You should, too.

What does the association’s master insurance policy cover? What are you responsible for insuring? Condominium associations’ bylaws and declarations answer these questions. Share copies of these documents with a knowledgeable insurance agent. They can help you determine what you’re responsible for insuring. Don’t rely on your neighbor’s word. Current owners can be improperly insured if their agent didn’t review the condo documents.

Some associations define a unit as “studs in.” Owners must insure subfloors and flooring, woodwork, cabinets, carpeting and other building items. Other associations are “all in”. The master policy may insure everything except your contents and improvements.

What is Your Association’s Insurance Deductible?

Many condo associations have increased property deductibles to control costs. Deductibles of $5,000 or higher are now common. Your policy should dovetail with the association’s deductible. A good insurance agent can help you decide on the right limits and deductibles.

Cover Your Own Stuff

Your Maine condo unit owners policy covers your belongings and appliances against loss or damage. It also covers your personal liability and the cost to live elsewhere if you can’t stay there after a loss. Associations may assess owners for a loss that exceeds their master policy insurance limit. Your policy can pay for some or all of that assessment. Your agent can help you choose the right limits.

Even “all in” associations may only include what was in the condominium when it was built. Did you or a prior owner upgrade countertops, flooring or fixtures? Insuring them may be your responsibility. Fortunately, upgrading your condo building insurance is easy and inexpensive. Tell your insurance agent about upgrades to your unit.

Do you own a condo and rent it to others? You’ll need a special kind of coverage. You’re still responsible for the unit like other owners, but have the added liability of a landlord.  Your insurance agent can quote the proper coverage for condos rented to others.

How to Find a Good Condo Insurance Agent in Portland Maine

If your agent doesn’t ask to see your condo association documents, find another agent. It’s impossible to know you have the right coverage without them. Look for an agent who offers a choice of several insurance companies. That way, when your insurer raises your rates you can shop without repeating the entire process.

If you’re buying a condominium in Portland Maine and are looking for condo insurance, contact Noyes Hall & Allen Insurance in South Portland. We offer a choice from Maine’s top condominium insurance companies. Unlike insurance company employees who only sell one product, we’re independent and committed to you. Click here to get a condo quote or call us at 207-799-5541.

Insurance companies pool risk. They collect money from many people to pay the losses of a few who have claims. Everyone’s rates go up or down, depending on the insurance company’s experience. More claims paid = higher rates.

You may be wondering:

It’s helpful to understand how insurance companies price their product. Insurance rates are recommended by insurance company actuaries. They project how much money the insurance company must collect to pay claims and make a profit. This requires complex modeling and formulas. Actuaries recommend rate changes to a special committee of company executives. The committee compares the actuary’s recommendation to the company’s profitability and growth targets. They agree on a proposed rate change, and submit it to Maine insurance regulators.

The regulator’s job is to make sure that insurance rates are:

Regulators may approve or deny the rate change, or ask for more information.

At its simplest, insurance is “money in…money out.”

Cheap insurance rates may leave the insurance company with insufficient money to pay claims and make a profit. Rates that are too high may send customers fleeing to other insurers.

But here’s the rest of the story:

Type of Insurance Company – Mutual insurance companies are owned by their customers. After they pay claims, mutuals store their profits to pay future claims. Other insurance companies are stockholder owned. Stockholders expect a return on their investment. Investors pressure executives of publicly held companies to improve profits every quarter. This can lead to larger or more frequent rate increases to stay ahead of current losses.

Reinsurance – Almost every insurance company is also an insurance consumer. They buy insurance against “the big one”. This is called reinsurance. Most companies reinsure against annual total losses exceeding a certain amount. This dampens the impact of multiple hurricanes, fires or other disasters in one year.

Of course, reinsurers are also insurance companies. They must collect more premium if they suffer unexpectedly large claims. Insurance companies pay different reinsurance rates based on their individual loss experience.

Do Disasters in Other States Affect My Insurance Rates?

Probably not as much as you think. Maine insurance regulators only allow insurers to file rates based upon Maine premium and losses. Claims that a company pays in California or Florida are not baked into Maine insurance rates. 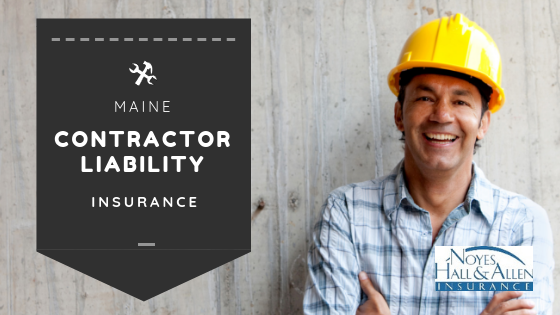 How Much Does Contractors Liability Insurance Cost in Maine?

The cost of your insurance depends on several factors:

My Job Requires $1 Million of Contractors General Liability Insurance. Isn’t That Too Much?

One million is a common requirement, even for smaller jobs. It seems like a lot of money, but it’s not when you consider how much damage or injury you could cause in a worst-case scenario. Many contracts for larger jobs require even higher limits. Fortunately, insurance companies readily provide these limits. The prices are probably lower than you think.

Can I Get Contractors Liability Insurance Today?

If you currently have insurance, have a proven track record of work and few or no claims, many insurance companies want your business. You can get insurance right away. If you’re new in business, or have never had insurance, it may take longer.

I’m Starting a Maine Contracting Business. Can I Get Insurance?

Congratulations on your big leap! Do you have lots of experience as a supervisor? Are you going out on your own after years of working for someone else? Many insurance companies will take you on as a new business with that kind of experience.

How Long Does it Take to Get Proof of Insurance in Maine?

Once your coverage is bound, your insurance agent can send insurance certificates to anyone who’s requesting one.

Do I Need to Get Certificates of Insurance from Maine Subcontractors?

Yes! Without proof that your subs have their own insurance, you may be responsible for injuries to them or damage they cause. Always collect and keep certificates of insurance from subs you hire. Otherwise, your insurance company will increase your rates at the end of your policy for your added responsibility.

What Other Insurance Does a Maine Contractor Need?

In addition to general liability, you may want to protect your tools and equipment against theft or damage. If you have a business vehicle, you’ll need commercial vehicle insurance. And if you hire employees, you must provide workers compensation insurance. Fortunately, insurance companies can bundle some of these with your general liability policy. This reduces cost and confusion from multiple bills and policies.

How to Get Maine Contractors General Liability Insurance

If you have a contracting business in Scarborough, South Portland, Westbrook or elsewhere in Greater Portland, contact a Noyes Hall & Allen Insurance agent in South Portland at 207-799-5541, or click the “get a quote” button below. We offer a choice of Maine’s preferred insurance companies, including MMG Insurance, Concord Group, Hanover, Liberty Mutual, Acadia Insurance and more. We’re independent and committed to you.