Many southern Maine jewelry store customers were hoping for snow on Christmas Day. Why? A local jeweler ran a well-advertised promotion promising free jewelry if it snowed on December 25. How can they afford to take that chance? We don’t know for sure, but we hope they consulted their local Maine insurance agent. While our agency had nothing to do with this promotion, we have helped clients reduce their risk by selling them weather insurance for special sales or events.

Can a Business Insure Against Bad Weather?

You bet! Let’s say your business plans an open house or a big one-day sale. You advertise heavily for 2 weeks before. You buy extra inventory, and add extra staff to take care of demand. But, a heavy snow storm keeps your potential customers at home, and you lose a lot of money. Or, you could buy a weather insurance policy to help recoup part of those costs, and cut your loss.

Can a Business Insure Against a Rainy Summer – or a Warm Winter?

What if your minor league baseball team suffers through a rainy summer? Or your tubing hill business encounters a warm, dry winter? Your organization might lose all sorts of same-day revenues: walk-up tickets; concessions; parking income, and more. A customized weather policy might pay a set amount if more than a certain number of game days have a specified amount of rain. A snow-area business could insure a mild winter in the same way, thereby stabilizing their income.

How Does Weather Insurance Work?

Like a good news article, weather insurance addresses the 4 W’s: What, When, Where and Who. As long as the event is measurable and the terms are specific, it can be insured. The price depends upon the terms. For example, if 6 inches of snow fall at a specific address in Portland, ME between 12:01 am and 11:50 pm on December 25 as measured by the National Weather Service, the insurer pays an agreed amount or percent of  a pre-determined period sales. Decrease the number of inches and you’ll pay more premium; shorten the sale period, you’ll pay less.

The possibilities are almost endless.

Where Can You Buy Business Weather Insurance?

Several online options offer “self-service” weather insurance. Being a Maine independent insurance agency, we recommend using the services of an agent or broker. It costs exactly the same.  A Maine  business insurance expert can help you determine your needs and work within your budget. They can also help you evaluate the market, to assure that the insurance company is reputable and financially secure. And, they can help you if you need to file a claim.

Workers Comp – A Cash Flow Challenge for Your Business

Paying workers compensation insurance can be a cash flow challenge. In slower months, it’s hard to scrape cash together for that quarterly payment. It’s also hard to estimate a year ahead what your payroll will be. Over- or under-estimating payroll at the beginning of the policy year creates a big year-end audit adjustment. You either get a big bill, or a big refund of money you could have been using to run your operation all year. 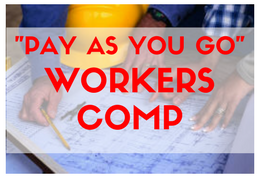 It’s simple to understand, and easy to start up. Pay-As-You-Go:

Many auto dealers offer low down payment options to sell more vehicles. Vehicles depreciate quickly. Early in the loan term you may owe more money than the vehicle is worth. This can be a serious problem if your vehicle is totaled early in the loan or lease term.

An Example of Loan Gap Coverage

Auto insurance companies pay the “actual cash value” (similar to “book value”) of your vehicle. The value may be less than the amount you owe on the loan or lease.

Luckily, you bought loan gap coverage. Instead of paying the book value the insurance company pays you the amount you owe. You can start over again with no debt. Not bad, huh?

Our Maine insurance agency is ready with answers to your personal, business or professional liability insurance questions. For answers, or to get a Maine auto insurance quote, or Contact Noyes Hall & Allen Insurance in South Portland at 207-799-5541.

Ten years ago, Lee Allen, one of the founders of Soule Allen Insurance, passed away. Lee was a true insurance pioneer, a trailblazer and role model for the many women business leaders who followed her. After Soule Allen was sold to Noyes & Chapman, and Blake, Hall & Sprague Insurance combined to form a new business, we chose to remember Lee’s great contributions to our business and our industry by continuing her name on the masthead.

Lee Allen remains an inspiration to those of us who knew her, and is fondly remembered by many clients, South Portland citizens, and insurance professionals throughout New England.

Here is a reprint of Lee’s obituary; a very brief list of the many acccomplishments of  a remarkable woman.

SO. PORTLAND – Leone G. ‘Lee’ Allen, 72, of Wescott Road, So.Portland, died Thursday, December 13, 2001 at her residence.She was born in Prentiss, Maine, a daughter of Laurence and Bernice Lindsay Averill.She attended Prentiss Schools and graduated in 1946 as an Honor Student from Bangor High School, and attended the University of Maine Evening School.
In 1961, she became the first woman in Maine to receive a Chartered Property Casualty Underwriter (CPCU) Designation.Mrs. Allen was the co-owner and Treasurer with William Soule of Soule Allen Insurance in So. Portland.
Mrs. Allen also received numerous awards including, ‘Insurance Woman of the Year’ in 1967; Governor’s Highway Safety Award in 1967 for Defensive Driving Activities, Maine Truck Owners Safety Award in 1970 for ‘Outstanding service in the Field of Highway Safety’, ‘New England Insurance Agent of the Year’ in 1979 for the contribution to the insurance industry and the community, ‘professional insurance Agents of Maine 1993 Agent of the Year’ which was for outstanding leadership and dedication to the insurance industry and the independent agency community.This year the Maine Chapter of CPCU 2001 Award was renamed in her honor, The Lee Allen Presidents Award for Excellence.
Mrs. Allen is survived by a sister Beverly Smart of Kennebunk, Maine, a brother Laurence Averill of West Palm Beach, Florida, several nieces and nephews; and her longtime business associate of 30 years, William R Soule of So. Portland.
Tweets by Noyes Hall & Allen Insurance