Northern New England was clobbered by an ice storm December 12 that closed schools and businesses (including ours) and knocked out power for over 200,000 Mainers. It brought back memories of Ice Storm ’98, the effects of which are still evident in Maine’s woods and the psyches of its residents.

Like the ’98 storm, this one left many people without electricity for several days – some are still without power 3 days later. Fortunately, this storm wasn’t followed by the bitter cold of a decade ago, which seems to have spared many from the misery of frozen pipes. Nevertheless, our office has been busy fielding insurance claims and stories of misfortune.
Here are some of the most common situations we’ve seen, and how most insurance policies respond. Of course, this is general information and NOT to be taken to indicate coverage (or lack of coverage) for any individual. To find out if you have coverage, refer to your own insurance policy, agent and company. Also, remember that your property deductible (often $500 or $1,000) applies. 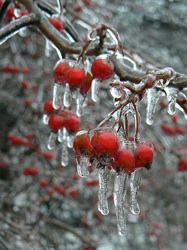 These are just a few scenarios we’ve seen since Friday’s storm. If you have questions about your individual insurance, refer to your policy or consult your agent (preferably, both). In a future post, we’ll talk about how to prepare for some of these disasters, and what action you should take if it happens to you.